Link controls to component properties in the LiveBindings designer 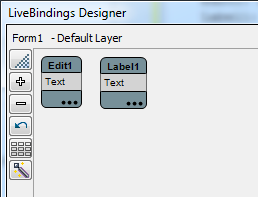 The LiveBindings designer can be used to connect these members: 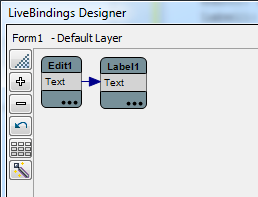 In the LiveBindings designer, the line between the components represents a link component.  Click the line to select the component in the object inspector.

The AutoActivate property indicates whether this link should be initialized when the application is run.  This property also activates the link at design time.

The InitializeControlValue property can be unchecked to prevent the component property value from being copied to the control when the link is initialized.

The LiveBindings designer can be used to connect a single control to multiple component properties. 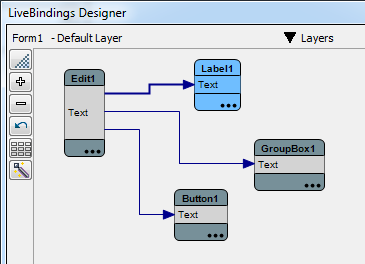 LiveBindings does not permit links between component properties, such as Label1.Text and Button1.Text.

The LiveBindings designer highlights members when a link is not permitted. 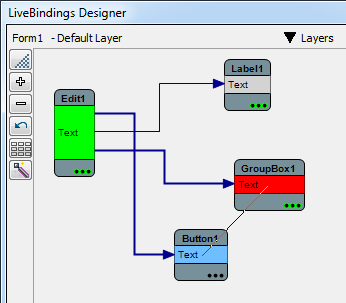 LiveBindings does not permit a direct link between two user input control,  such as Edit1.Text to Edit2.Text. To achieve the same effect, link both controls to a TPrototypeBindSource field. 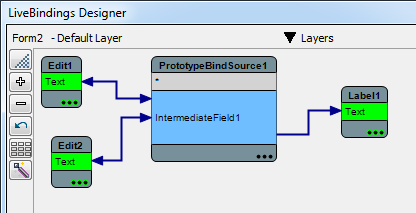 The links shown in this image will keep all "Text" members synchronized when the user modifies one of the edits then presses Enter, or exits the edit.


Linking to other properties

To show additional component properties in the LiveBindings designer, click "..." to open the "Bindable Members" dialog. 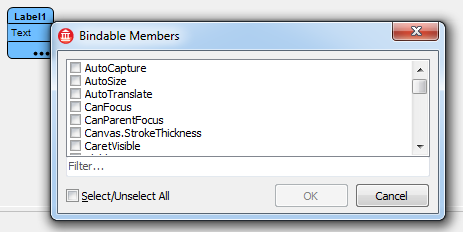 This dialog populates a list with properties found by scanning the type information of the component.    Some properties are skipped because the type, such as sets, is not supported in LiveBindings expressions.  Put a check mark next to a property to show it in the LiveBindings designer.

Connecting from a control to "..." is another way to get at additional properties.  For example, drag from "IsChecked" to "..." and select the "WordWrap" property. 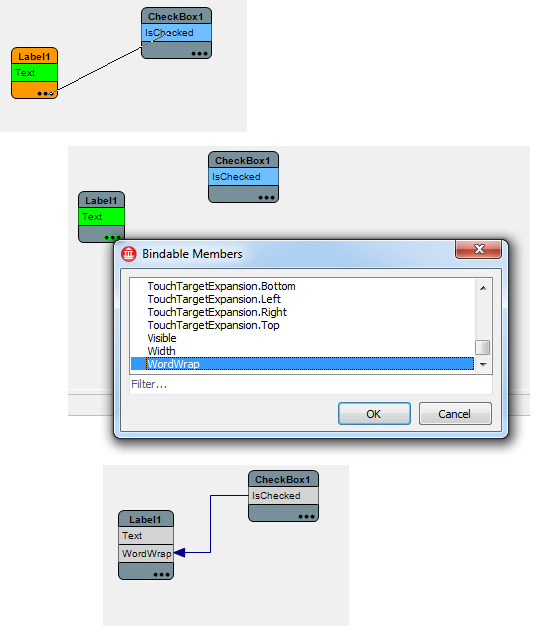 LiveBindings uses RTTI to read and write component properties.  So no changes are needed to make a component's properties linkable.

To make linking to commonly used properties easier, there is a registration method to indicate which member to show, by default, in the LiveBindings designer.   For example, RegisterValuePropertyName() is used to register "Text" as the default member of a FireMonkey TLabel and "Caption" as the default member of VCL TLabel.  See Fmx.Bind.Editors.pas and Vcl.Bind.Editors.pas.  RegisterValuePropertyName() is in Data.Bind.Components. 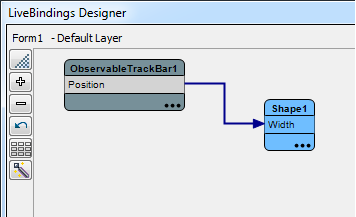