Posted by Jim T1392 on Wednesday, 3 October 2012 in Blogs
This post describes how to specify which components show on the LiveBindings designer.

To reduce clutter, the LiveBindings designer hides many classes of components. The default settings show most visual control classes and hide most non-visual components classes except for data sources.

The settings are in Tools/Options/LiveBindings:

If there is a component class that you always want to see on the LiveBindings designer, add it to the "Included Items:" field. For example, if you use FireMonkey 3D controls then you'll probably want to add "TControl3D".

This setting will cause components derived from TControl3D, like TText3D, to show in the LiveBindings designer.

To hide a specific component, right click on the component in the LiveBindings designer and choose "Hide Elements(s)". 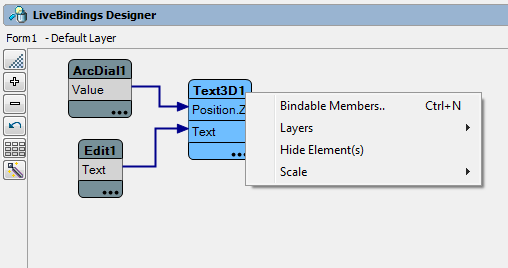 To show a hidden component, use the object inspector to change the LiveBindings Designer properties for the component. 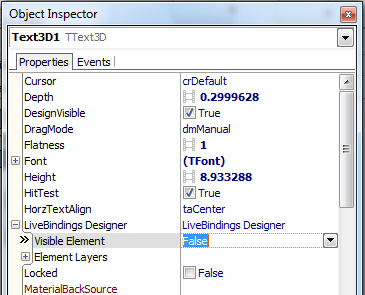 The LiveBindings designer can be configured to show the TCustomForm class, but the form instance will not show in the designer until the form is linked.

To configure the LiveBindings designer to show TCustomForm, prepend the "Included Items:" setting with "TCustomForm;".

A link can be created to a TLabel and then modified using the object inspector. 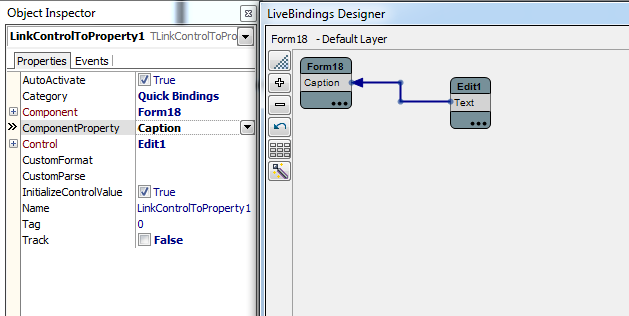