Posted by David Millington on Wednesday, 22 March 2017 in Blogs 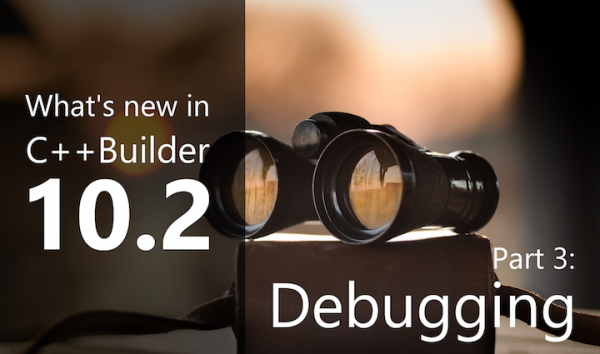 RAD Studio 10.2 Tokyo is out now, and I'd like to let you know some of what you can expect to see new on the C++Builder side.  While the majority of work is for Linux, which will be available for C++ in 10.2.1, we've worked on three key areas:

Today I want to discuss what's new for debugging.

As you probably already know, we using Clang as the basis for our modern generation of compilers, on mobile, Linux, and also Windows.  The 'classic' compiler (bcc32) will remain around for the foreseeable future, but the Clang-based ones are where our technology is heading.

We've made some significant improvements to the debugging experience for the Windows Clang-based compilers.  Some address bugs, such as ensuring the class names are always shown in the call stack, but in this post I want to focus on variable evaluation.

In Win32 and Win64, there were sometimes problems evaluating local and/or parameter variables. The reason was related to variable behaviour even at optimization level 0, and spilling registers to the stack. You can now always evaluate a local variable.

In Win64 we've additionally gone even further with debug info, fixing a problem when there are multiple variables with the same name in different scopes. These weren't always able to be differentiated correctly. 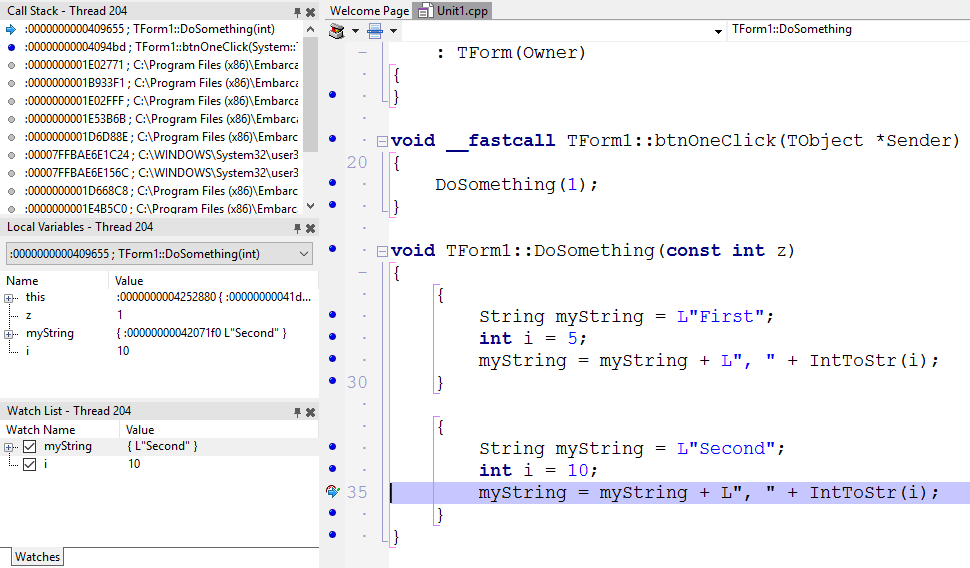 In this screenshot you can see two blocks with the same variable names but different values, as well as a parameter, and the variables being correctly identified and displayed in the Local Variables and Watches views. (This also works when a parameter has the same name as a local variable.)

In 10.2, we've added a feature to the Win32 Clang compiler that was already present in the classic bcc32 compiler: external type files. What problem does this solve?  A good example is when using the VCL, which has many thousands of types: many individual units may refer to VCL types and include debug info they, validly, need; that info was correctly and validly included - and duplicated. This meant that debug data could often be very large, with attendant problems relating to linking it and loading it.

This feature is already in the classic bcc32 compiler, and is on by default - you may not even know you're using it!

Why is this only the Win32 compiler? The Win64 compiler uses a different debug format and is much less affected by debug info size.

This feature may count for codegen more than debugging. There were a few bugs in the Clang compiler's exception handling, mostly potential memory leaks so that you might have leaked a small amount of memory per exception. While not affecting most applications, this is important for long-running or 24/7 applications such as a server app. These are now resolved.

We would encourage you to make use of the robust exception handling present in the Clang compilers. This is the third release of C++Builder with a Win32 Clang-enhanced compiler, and the eighth with a Win64 Clang-enhanced compiler, and we're encouraging migration in general: regard better exception handling as yet another benefit!

C++Builder 10.2 has some great new features, and some important quality fixes, in key areas of linking, code generation, and debugging.  We hope you find using it productive!  It is out now!