The Space Shuttle Atlantis landed this morning on Runway 15 at the Kennedy Space Center (KSC) in Florida at 5:57am EDT.  The landing marked the end of 30 years of the Space Shuttle program.  I want more explorations both robotic and manned spacecraft.  In Star Trek we were told over and over again "To boldly go where no man has gone before".  In software development we continue to go where no programmer has gone before.

Exploration drives us forward. Exploration drives our imagination.  Exploration finds the answers to questions and raises even more questions.  John Masefield, in his poem, Sea Fever, made a simple request,  "All I ask is a tall ship and a star to steer her by".  Just give me a programming language, some tools, a vision of an application to build and I will sit at the computer for hours on end exploring the depths of algorithms, data structures, patterns, objects, user interfaces, and architectures. We are all explorers in one form or another.

If the programming languages don't have what I need, I'll either extend the language or create a new one.  We have been exploring since the dawn of man and woman.  In computer science, we have been exploring for more than 70 years.  This seems like such a short time compared to the collective exploration experience of generations of dreamers and travellers.

So, what more do we need to explore in the software universe?  How about new use cases, new domains, new applications, new architectures, and automating the "unautomatable".  It's awesome that so many developers, engineers, teachers, students and researchers are exploring the expanding uses of software and hardware.  Without all of the computer technology used on the ground, on the space shuttle, on the International Space Station (ISS), we would probably still be earth bound looking up at the stars and dreaming.

As a kid in the 50's, I would stay up all night to wait for a launch.  I was amazed by the orbit of Yuri Gagarin.  I stayed up waiting for Alan Shepherd to blast off (my mom thought I was crazy). I continue to watch as NASA pushes past the Moon to Mars, Jupiter, Saturn, Neptune, and Uranus.  I can hardly wait until July 2015 for NASA's New Horizons spacecraft to encounter Pluto, Charon and then continue into the Kuiper Belt.  It was my fanatic interest in the space program that took me to Cal Poly San Luis Obispo and via Aeronautical Engineering led me to a BS degree in Computer Science in 1973.

I've had the honor and privilege to visit the Johnson Space Center (JSC) several times over my years in programming.  My most recent trip was to visit with the software engineers on the Space Operations Computing (SpOC) Team at JSC and to enjoy some out of this world cheesecake! 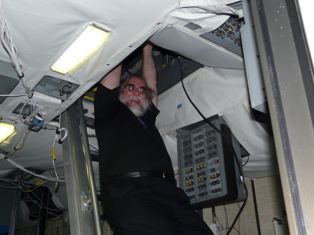 The SpOC team uses Embarcadero developer tools to build several mission critical systems that operate on the ground, on the Space Shuttle, and on the ISS. A few of the SpOC applications include (SS=Space Shuttle, ISS=International Space Station):

First, I want to congratulate everyone who ever worked on the Space Shuttle program, your vision, dedication, and engineering set the gold standard.  I especially want to thank the SpOC team (Keith, Brian, Wayne, Tyler, David, and everyone else) for using our tools, for helping drive us forward, and for pushing the envelopes of technology where no one has gone before.

The landing of Atlantis may have closed the three decades of the Space Shuttle program, but I know there will be exciting explorations for centuries to come.  Just try to stop us, I dare you!
Tags: C++ C++Builder Computer Science Delphi Education Embarcadero International Space Station Java JBuilder Programming RAD Studio Random Thoughts Space Shuttle Star Trek