Posted by Paweł Głowacki on Wednesday, 5 October 2011 in Blogs
I'm just back from Kolding in Denmark where I had a pleasure to show RAD Studio XE2 and FireMonkey to the fully packed room of Danish developers. Only two weeks ago I have been showing RAD Studio XE2 in Copenhagen and now it was the second RAD Studio XE2 World Tour event in Denmark. Very big interest in FireMonkey programming, lots of questions and lots of goodies to give away;-)

It is just a perfect time to be one of the first in the world to learn FireMonkey programming - the next generation application development! 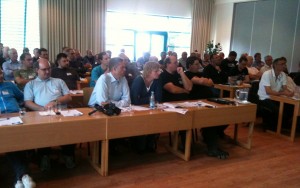