Posted by Paweł Głowacki on Monday, 5 December 2011 in Blogs
Last Thursday I have been to Belgrade in Serbia to demonstrate the new RAD Studio XE2, Delphi and FireMonkey to more then 40 developers. I took some pictures, but my mobile phone no longer works, so they are still stuck in the memory of my iPhone. If I manage to repair my phone I will put them here later.

Native development is strong in Serbia and everybody loved the new Delphi XE2 and FireMonkey. One of the other impressive things to show was a blog post by Andreano with the photo of 700 Delphi developers on the Delphi conference in Brazil. That's so cool and shows how vital is the Delphi technology today around the world.

I'm in the airport again. Just waiting at the gate for my flight to Sofia in Bulgary where I'm going to show RAD Studio XE2 tomorrow. 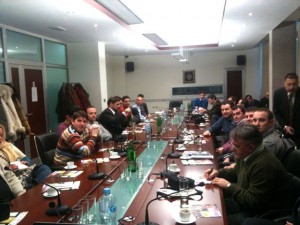