Posted by Michael Duncan on Tuesday, 4 August 2009 in Blogs
"Where on earth are my sunglasses?"

After searching for a full five minutes, I finally find them and get on my way to Embarcadero to take care of more important business. Most of us have set down our keys and forgotten exactly where. We *know* we saw them a while ago, but where exactly? A few seconds delay, or a few minutes, an unwelcome interruption. Valuable neuron time wasted on the mundane.

The same problem happens using software. You're happily working away, firmly in the zone, when you need to do just one simple thing. Problem is, it's not something you do every day. So now you have to try and remember how you got to that dialog, file, setting, program, whatever. What folder is it in? Which main menu item was it under? View? Window? Hm. Maybe it's in a sub-menu. Nope. What was the hot key again? You relent and hit F1.

Now you're out of the zone. Dang.

In Windows, Vista helps out by providing the Start Menu search box. Tap the Windows key, start typing and you'll be presented with a list of choices, one of which is likely what you want. Google Desktop does the same thing with Ctrl+Ctrl. Yes! The entire filesystem at your fingertips.

RAD Studio 2009 caught on to this paradigm somewhat with the ability to search the component palette and in the component wizards. Very helpful and a great time saver.

Now RAD Studio 2010 brings palette search to entire IDE. We call it "IDE Insight", and it puts most functionality of the RAD Studio IDE at your fingertips. Just like Code Insight shows appropriate functions, methods, types, etc., based on the current editor context, IDE Insight uses the current IDE state to show you a list of things you can do, with a minimum of effort and distraction. My goal in developing it was to save you a few seconds a hundred times a day, and help you stay in that coding zone.


Suppose you want to see what breakpoints are set before starting a debug session, but the Breakpoints window isn't currently visible. View menu, or Run menu? Maybe you don't want to grab the mouse - was it "Ctrl+Shift+B" or "Ctrl+Alt+B"? Don't remember? Just use Ctrl+.  ( <-- that's a period )

IDE Insight initially shows all the categories of available items. Not particularly useful at the moment, but they're there for a reason that'll be apparent later.

Now just type the word "break" in the search box: 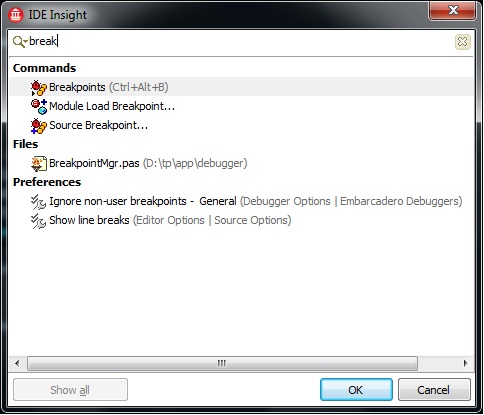 Tap the <Enter> key and you're there.

Suppose you want to lengthen the Code Insight delay time. What page was that on? Who cares? 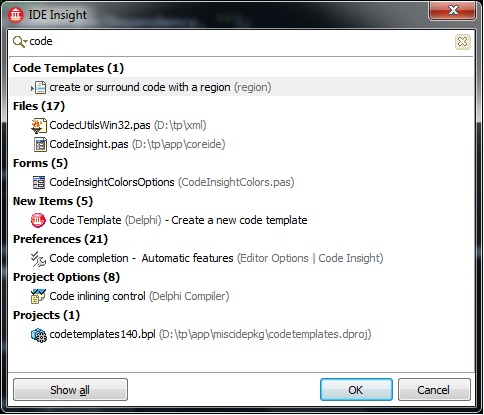 The search for "code" is a little too broad - 1 code template, 17 files, 5 forms, 5 Repository items, 21 preferences, 8 project options and one project. If you want, you can see all matches at this point by toggling the "Show all" button (or just typing Alt+A) and scrolling through the list: 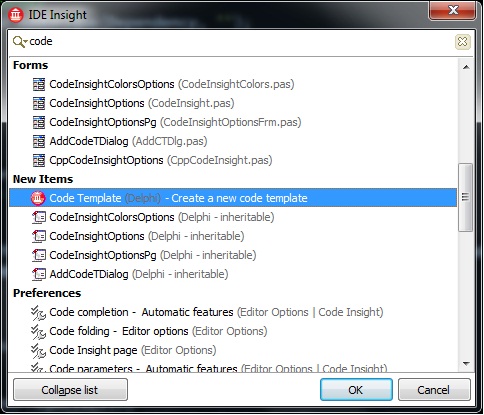 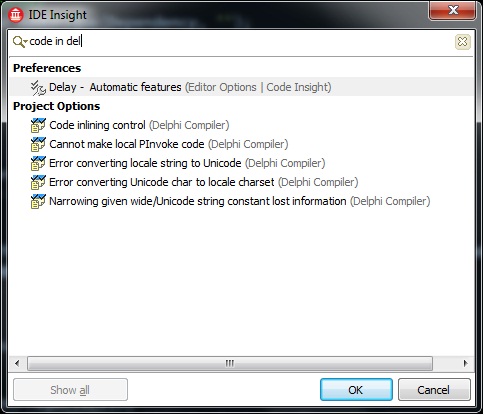 Press <Enter> and up comes the Tools | Options dialog on the correct page and with the relevant control focused: 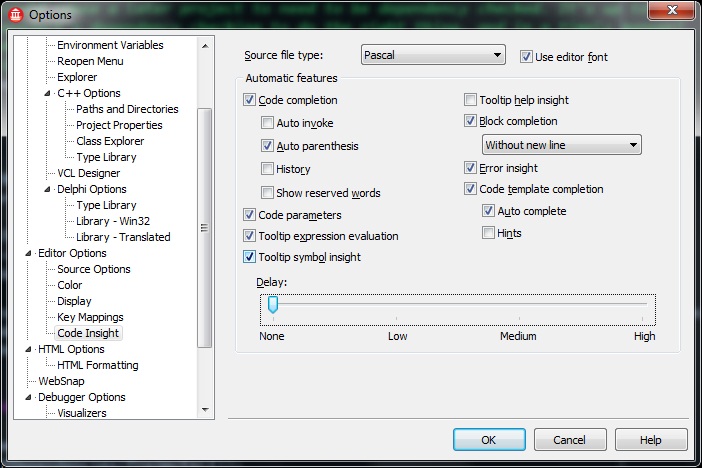 Now just right arrow to lengthen the delay, hit <Enter>, done. A handful of seconds and some brain cycles saved.

Invoking IDE Insight when the form designer is active shows components from the component palette (including what pages they're on) plus all controls on the form. You can use it to drop a new component or select an existing one:

Exactly what will happen when selecting an item depends on its category.

You can turn off categories you're not interested in. Click on the magnifying class icon in the search box and deselect them:

If the widespread acceptance of IDE Insight by the RAD Studio team is any indication, it will be a great benefit for customers as well. Whenever I need to do just about anything in the IDE I immediately reach for Ctrl+period.