This [ "The Past, Present, and Future of Professional Programming" ] is the cover story from the July 1989 issue of Computer Language. It was the magazine's fifth anniversary issue.

We were eager to distinguish Computer Language from other developers' magazines by demonstrating that our readers were more likely to be deadline-oriented professionals, less likely to be hobbyists and hackers. As editor, I thought the best way to do that was to focus on the one development tool that best embodied the values we stood for: a high-productivity tool with superior support for the principles of software engineering. It had to be -- could only be -- Turbo Pascal.

The rest of the PC universe was still crazy for C in 1989; our article was a deliberate attempt to get readers to step back and consider that development should be a reliable, repeatable process, not arcane sorcery that could be performed only by the most gifted source-code wizards. Turbo Pascal stood for the same values we did.

[ David I note: the following are the first two paragraphs of the Computer Language Magazine article by J.D. The complete article can be viewed by clicking on the tumbnail graphics of the original article's four pages. ] 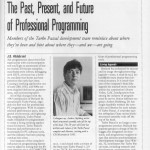 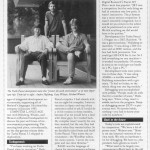 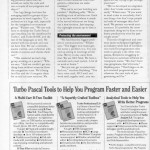 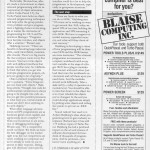 "Ask programmers about their first experiences with microcomputers and you'll get an assortment of horror stories: 20-minute compiles, mainframe-style editors, debugging with DDT...everyone has a favorite anecdote that shows just how primitive the early days were. Coaxing a working application out of early Z80, 6502, and 808x systems required dedication, perseverance, and a pioneering spirit."

"All of that changed with the 1983 introduction of Borland International's Turbo Pascal, arguably the first tool for professional PC programmers. With its unprecedented performance specs, integrated environment, and lightening-fast compilation, Turbo Pascal made it feasible for programmers to make a living creating applications for micros. Turbo Pascal's features and performance set a benchmark for PC software tools, and the industry has been playing catchup ever since."

[ David I. note - Happy Thanksgiving everyone!  If you have Turbo Pascal version 1.0 stories to share, send them to This email address is being protected from spambots. You need JavaScript enabled to view it. and I will post some of them during this 25th anniversary month. Native code compiler Turbo Pascal lives on in Delphi 2009 - if you haven't tried it yet, get the trial download at http://www.codegear.com/downloads ]
Tags: History Languages Pascal People Programming Turbo Pascal v1