May the Force be with you! (and MyEDN for iOS)

MyEDN was originally submitted to the AppStore for review on April 9th.

My first mistake was not including, setting up and populating a test account for Apple to test MyEDN. DOH!

That cost me about a week, because the review process is clocking at about 6-7 days it seems.

They sent me a request to update the review notes with a test account and test instructions, and finally submit the new meta data. Unfortunately the reviewer had put MyEDN in the wrong state, and it took me a while to figure out that the only way to get it back into Waiting for Review was to submit a new binary (actually the same one).

About a week later it was rejected with some unspecific pointers about the UI. This was the login screen at this point: 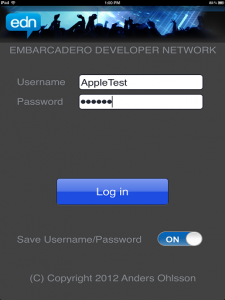 I asked for clarification, and got another couple of messages back from the reviewer that weren't specific enough for me to figure out what exactly they wanted instead.

I decided to use the Appeal option, and while waiting for that process I ripped the UI apart and recreated it from the ground up. I added info screens throughout as well as more functionality.

Yesterday I got a call back from a very nice person of the App Review Board, and it became clear that the issue wasn't UI at all. I had a link to www.embarcadero.com in my description of MyEDN. This is considered disallowed marketing, even though my phrasing was specifically "PS: An EDN account is required to use this app. If you don't have one, you can create one here..." - in retrospect a link to members.embarcadero.com would probably have worked better, but I opted to remove the link completely. I don't foresee anyone that isn't already an EDN member downloading MyEDN anyway. Finally, Apple had also found a crash bug, which is now addressed.

By this time I already had the new UI ready to go. My plan was to make it an update, but since MyEDN still wasn't approved I simply uploaded it as a new binary and it's now pending review in this form: 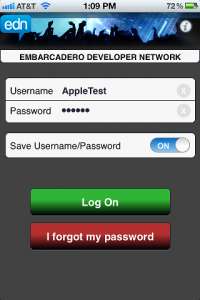 I'm much happier with this look and feel, and my hope is that the Force is with MyEDN this time. If the review cycle stays on it's current 6-7 day schedule MyEDN should go into review by the end of next week, and hopefully I've knocked out all issues and it will be approved so that you guys can have at it. I can't stand the fact that Cleggy teases me on a daily basis that EDN Mobile has been in Google Play for weeks and that he's updated it multiple times in the last couple of days. I told him that in his case no review was required, and that his UI is still nowhere near mine. Apple is holding MyEDN to a much higher standard than that! So there, Cleggy... ;)

PS: All this experience with App Review feedback, Appeal etc will be awesome fodder for upcoming webinars as well, so that all of you can create awesome iOS apps.
Tags: Delphi XE2 FireMonkey iOS iPhone RAD Studio XE2