Posted by DavidI on Thursday, 8 September 2011 in Blogs
I arrived last Sunday night in Tokyo for the start of my round the world your in 13 days.  I am in Germany now on my way to Cologne for the Delphi Tage 2011.  Here is a recap of the Japan part of my tour.


Tuesday - Tokyo– Developer Camp in Akihabara (sad that I did not have time to do some electronics shopping) with more than 130 enthusiastic attendees. I did three sessions:  RAD Studio XE2 Product Address, What’s New in Delphi/C++Builder and Multi-Platform Development with FireMonkey.   Attendees love the 64-bit Delphi (also want 64-bit C++ which is on our roadmap).  They really liked FireMonkey development for Delphi/C++ for Windows/OSX and iOS (Delphi for now).  Cloud computing is also taking hold in Japan.  RAD Cloud support in RAD Studio XE2 includes Delphi/C++ components for cloud storage (blobs, tables, queues) on Amazon S3 and Microsoft Azure.  You can also deploy your applications from the IDE to Amazon and Azure using the Platform Assistant.  Mobile application development solutions across RAD Studio XE2 solutions was hot hot hot – both for Delphi and RadPHP. 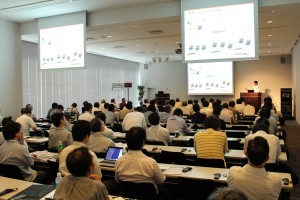 The last session was a technology lightning round where each presenter was given five minutes to show something really cool (see a picture of the participants below). More about the lightning round talks in another blog post.  In the evening, we had a dinner in the evening with the top developers/speakers/partners with lots of excitement for RAD Studio XE2 and the future of multi-platform, cloud, and mobile development. I had a wonderful conversation with Tateo Nagai, group manager for life science solutions, who uses Delphi in his project team was excited to show RAD Studio XE2 to more of the developers at his entire corporation. He also used Delphi to build a home accounting application using Delphi and can now create a Macintosh version of the same application with Delphi XE2. 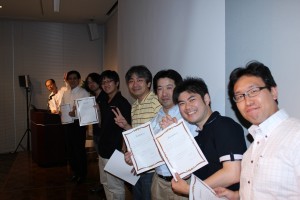 Wednesday – Kobe - We travelled to the 2011 CodeZine Kansai Developers Summit in Kobe. I gave a Multi-Platform 45 minute talk with demos of FireMonkey and iOS support in Delphi XE2 and iOS/Android support in RadPHP XE2 – lots of interest and smiles among the 80+ people in attendance.  I tried to show everything possible in the 45 minute talk, but there is so much fun to show developers, and I tried to get it all probably driving the simultaneous translators crazy.  Evening dinner with speakers and luminaries in Kobe. Lots of questions about what we are doing with multi-platform and mobile and lots of interest and cheers about what were doing.  I talked about mobile application development with a Microsoft Windows Phone 7 evangelist.  I also had a great conversation with Taro Kawai, R&D Unit Leader for Yahoo Japan Developer Network. It was also wonderful to talk about cloud application and storage with the Tomohide Kubota, senior technical director for Nifty Corporation and their Nifty Cloud solution.   I took a poll of the 32 developers and speakers at the dinner – most had iPhones, about a third had Android phones and 2 had Windows Phone 7 phones.

Thursday – Kansai/HongKong/Frankfurt - long overnight flight from Japan via Hong Kong to Frankfurt Germany to continue the Europe portion of my round the world tour.  Before I left the Japan, the country of the rising sun, here is a picture I took from my Kobe hotel room (woke up at 4am proving that I was still jet lagged). 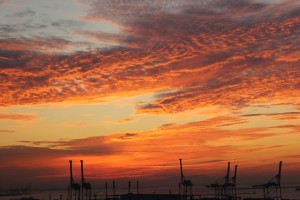