Posted by Paweł Głowacki on Tuesday, 9 May 2017 in Blogs 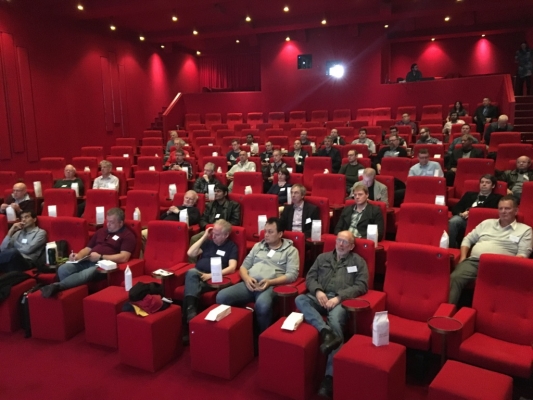 What a day! I'm just sitting at the gate in the London Heathrow airport waiting for my flight to Amsterdam. It was a great RAD Studio 10.2 event in London today. Embarcadero and Grey Matter, our UK reseller, organised the event about the latest version of Delphi and C++Builder in a nice private cinema building. All attendees additionally to other goodies received pop-corn and it was a lot of fun. Stephen Ball, my good colleague from Embarcadero, joined me on stage for the Q&A and a small InterBase 2017 presentation. There many Delphi and C++Builder enthusiast in the audience including world known Delphi expert Brian Long and the UK Delphi User Group members.

Cinemas are good places for events like this. Big screen, HDMI output, speakers to play some Asteroid Galaxy Tour music during breaks are always nice to have. Luckily comfortable chairs did not put the audience to sleep. There were many, many questions and suggestions. I like one productivity enhancement idea to add to RAD Studio IDE some logic, so it adjusts to working patterns. On every single 10.2 event, when Quick Edits are shown, there is a question if it would be possible to add your own custom form designs to "Quick Form" menu. Something for Marco! Another feature to consider is adding FMX Linux support. It is already at FmxLinux.com and I showed the FireMonkey "DesktopControls" demo running on Ubuntu Desktop. It was received very well!

RAD Server and publishing REST APIs with Delphi was one of the key topics today. On every recent 10.2 event I'm asking who in the audience is using RAD Server and typically the answer rate is zero. This technology is very interesting and it was nice to show building simple EMS packages and deploying them to RAD Server.

Thank You London! I will be back:-) Next week I'm going to have three "Accelerate Your Delphi Development" live events in the row: France, Belgium and the Netherlands. See You there!