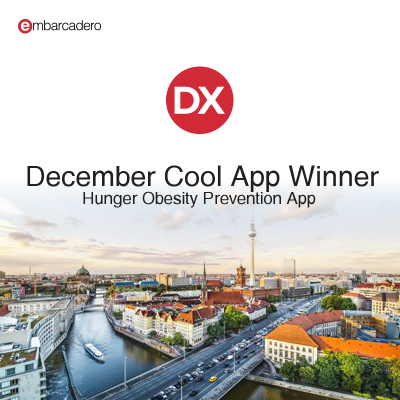 The HOP app was developed with Embarcadero’s RAD Studio by middle school students Shreeya and Sefalta as part the ProjectCSGIRLS program that nurtures girls’ interest in computer science. It allows obese children to “share calories” with hungry children by donating on their behalf to UNICEF to celebrate burned calories that result in each pound of weight loss. The app helps overweight children set goals, track physical activity, create diet plans and record weight over time, while motivating them through contributing to a greater cause.

“It’s truly humbling to see how young developers are making such a profound impact in the world using our tools,” said Jim McKeeth, lead developer evangelist and engineer at Embarcadero. “It’s our honor to award HOP the Cool App distinction for December, and we’re really excited to see how the app will help countless children around the world.”

“We tried lots of different tools to create our HOP app, but found they were difficult to follow and the codes were too long. Embarcadero, on the other hand, was very easy to use for app development,” said software engineer Suresh Krishnan, who shared the girls’ experience with Embarcadero. “The drag and drop menus, form builder tools and easy coding options were quite convenient. Without prior knowledge or experience in advanced coding, we were able to easily compile codes for multiple devices and develop the app quickly. We’re excited to win the Cool App contest and strongly recommend Embarcadero to other kids interested in developing apps.”

Embarcadero’s Cool App contest is open to any business or consumer application built with RAD Studio, Delphi or C++Builder. Qualifying apps can use VCL, FireMonkey, DataSnap, EMS, FireDAC, InterBase and any other components, libraries, services, sites, infrastructures, APIs or devices. Embarcadero awards Cool App contest winners a $500 Amazon gift card and winning submissions are also highlighted on the company’s YouTube channel. For more information on the contest and a link to the submission form, click here.