Posted by Stephen Ball on Thursday, 27 September 2012 in Blogs
So Tuesday saw my final stop in this month launch of RAD Studio XE3 and it was lovely to finish back in a town I know well, Aarhus. Despite the constant rain, we had great fun throwing out FireMonkey and Embarcadero beanie hats for a host of great questions.

After having the pleasure of Thomas's company in Copenhagen, Jen's Fudge (who recently became Embarcadero's first Danish MVP) was present to talk about DAPUG, the Danish Embarcadero User Group and the events they have coming soon with Anders Ohlsson and David I, as well as to take a few fun pictures for the twitter feed. #RadXE3 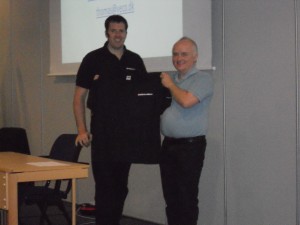 So this event was really well attended with a sold out room of about 80 developers in Aarhus. 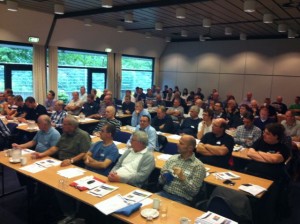 As always in Denmark, a very knowledgeable crowd with some great questions. I especially liked hearing in the breaks about what you guys are using Delphi and C++ Builder for; Denmark really does seem to have some very innovative technical solutions companies :-) 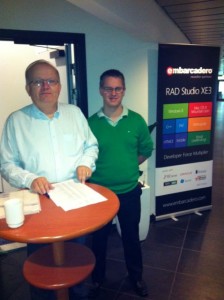 It was great to see Anders again (who doesn't officially start till the 1st October) come along to support the events and be part of the day, and join in with the twitter chat.
Tags: Events