Posted by DavidI on Wednesday, 29 February 2012 in Blogs
Today is February 29, 2012.  Leap Day!  I have arrived in Johannesburg for tomorrow's "RAD Studio XE2 in Action - Live" workshop.  I had a few minutes between arrival and our check of the venue, our slides and the demos.  We had lunch in Nelson Mandela Square in the Standton area of Johannesburg.  I had my picture taken in front of the benevolently smiling Nelson Mandela statue (click on the thumbnail to see the whole picture). 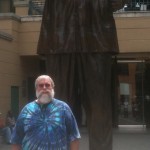 Today is Leap Day.  In the Delphi RTL System.SysUtils.pas unit, the function IsLeapYear is implemented as:


I hope you all have a great, "extra day" today.  After the workshop tomorrow, we will move to Cape Town for the "RAD Studio XE2 in Action - Live" workshop there.