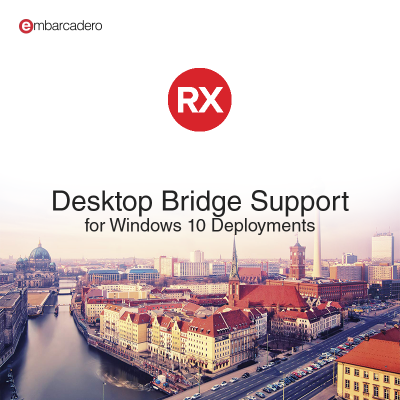 AUSTIN, Texas--(BUSINESS WIRE)--Embarcadero Technologies (a division of IDERA), a leading provider of software solutions for application development, today announced that RAD Studio is the first integrated development environment (IDE) to provide built-in support for packaging Win32 and Win64 applications for deployment to the Windows 10 Desktop Bridge, and into the Windows 10 Store. This opens the path for developers to deliver millions of existing apps – along with new applications – to hundreds of millions of Windows users in minutes.

“With the Desktop Bridge in Windows 10, Microsoft is bringing a tool that enables software built on the Windows desktop to use the modern Windows app packaging format. This brings benefits of cleaner installs, uninstalls and updates, new distribution opportunities through the Windows Store and Windows Store for Business and the software can also be enhanced with Universal Windows Platform capabilities such as notifications,” said Kevin Gallo, corporate vice president for the Windows developer platform at Microsoft. “We are excited that developers can now use RAD Studio to directly build applications that utilize the Desktop Bridge. RAD Studio is the first developer IDE to support the Desktop Bridge and enables a fast migration route for existing applications without a major rewrite.”

Quick Transformation to Windows 10 – RAD Studio enables developers to transform existing products to take full advantage of Windows 10 faster than with any other native Windows development tool, dramatically reducing the risk of migrating to Windows 10.

Low cost and low risk migration to Windows 10 – Migrating to Windows 10 is achieved in minutes, without the expense of re-developing existing application code and the associated re-training of staff, testing and time.

Early to Windows 10 store – RAD Studio provides first/early mover advantage to millions of developers looking to migrate to Windows 10 and its active marketplace of hundreds of millions of end users worldwide.

One native code base - all major app stores – Developers already building with, or starting projects using the cross-platform FMX framework can now build and deploy native applications from a single code base to all the major app stores spanning Android, iOS, macOS and Windows.

“With RAD Studio enabling developers to quickly build existing application code for the Windows Store, Embarcadero is providing the fastest route to a market of hundreds of millions of Windows 10 customers,” said Atanas Popov, general manager for Embarcadero. “Adding the Windows Store to the built-in IDE packaging for iOS, Android and macOS app stores, RAD Studio now allows developers to easily reach billions of users from the same native code base across the key leading platforms.”