Posted by DavidI on Monday, 2 December 2013 in Blogs
Regardless of the previous version of Delphi you are using, there are a large number of benefits you will gain by moving your projects forward.  There is also a special offer for all Delphi customers (regardless of the version you are using) to move up to our latest XE5 release. I am sure that you see that there a lot of great new technology available to you as a Windows VCL developer.

What Delphi XE5 can give you compared to your current version


Here is a Windows/VCL example that gets the Ambient Light value on my Samsung Slate Series 7 tablet. Create a new VCL Delphi application. Put a button and three labels on the form. Set the form caption to "Get Ambient Light VCL Demo". Set the button caption to "Get Ambient Light". Set the first label to hold the caption for the Lux (light value) label. Set the second label's name to "AmbientLightSensorLabel" (this is used to display a message for whether an Ambient Light Sensor is found or now). The third label is going to contain the ambient light value, name this label "LuxLabel". For the Button's onClick event handler use the following code (remember to include the uses statement in the implementation section for the System.Sensors unit):

Here is the app running on my Samsung Slate Series 7 with the afternoon light here in Scotts Valley at around 3pm today: 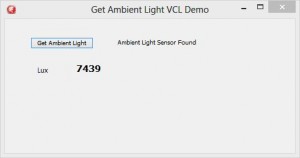 Here is a blog post showing how you can integrate Windows based sensors in your DelphI VCL applications. The blog post references Delphi XE3.  You can use the same code with Delphi XE5. See the source code and output at http://blogs.embarcadero.com/davidi/2012/10/03/41699. The following screen shots were grabbed from my Windows 7 VM (hosted on MacBookPro using VMWare Fusion for the Mac) and my Samsung Slate Series 7 running Windows 8.