Posted by Paweł Głowacki on Tuesday, 8 December 2009 in Blogs
In two days I'm talking about Windows 7 development at Delphi 2010 HandsOn Workshop with Bob Swart and Bruno Fierens from TMS Software.

Because of the performance considerations Direct2D has been implemented in native code in Windows 7 and Delphi VCL provides superior object oriented abstractions on top of raw Windows API.

I have decided to give it a try and translated to Delphi from C++ code the "Advanced Geometries" example that ships with Windows 7 SDK. 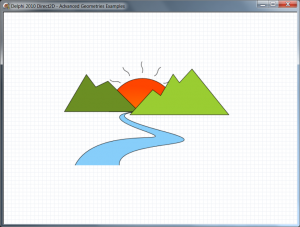 The main form in my "DelphiAdvD2DGeometries" Delphi 2010 project has been structured based on information provided by Chris Bensen in his blog post http://chrisbensen.blogspot.com/2009/09/touch-demo-part-i.html.