Posted by DavidI on Monday, 9 December 2013 in Blogs
Jim McKeeth was the first of us to get Google Glass and to build the first Delphi XE5 app to run on glass.  I now also have Google Glass and built my first Delphi XE5 app for it. I paired my Samsung BlueTooth wireless keyboard to my Glass so that I can do data entry into a Delphi FM form.  The program code is the standard TEdit, TLabel and TButton app. Here is the form and the code: 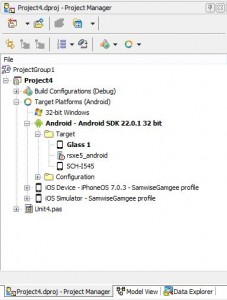 With the keyboard I can use the Tab key to move around the form and type into the edit box. After compiling and deploying my "Project4" application to Glass, you can see the FM icons for each of my apps on my Glass desktop:

Here is the screen grab after I type some text into the edit box and hit the button. 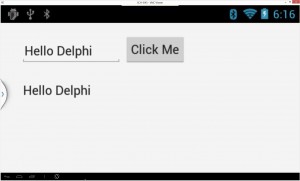 The same app above can be compiled for Windows, OSX, iOS and Android using the same source code and project. Get started building Android apps using Delphi XE5 and those apps will also work on your Glass (when you get one). Of course there is always more to do including added support for Glass specific APIs.  More about this in a future blog post.
Tags: Android Delphi Devices FireMonkey Google Glass Object Pascal Pascal Wearables