Posted by Paweł Głowacki on Monday, 9 March 2009 in Blogs
Delphi is alive and kicking!!! Last week Delphi developers on RAD Studio workshop in Lier in Belgium were really happy to hear that Embarcadero CEO, Wayne Williams, is Delphi developer himself:-) Such small facts give us - Delphi developers world wide - the confidence into the future of Delphi - the best IDE for building high performance Windows applications! No doubts about that! This workshop was organized by Embarcadero partners: Barsten, PeopleWare and Synapsis Group. 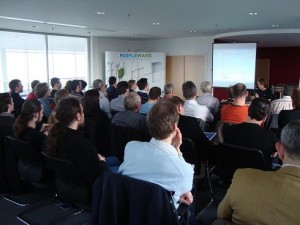