Posted by DavidI on Sunday, 16 November 2014 in Programming

Lee Clark in our Maidenhead England office reminded several of us about a 10 year old blog post, "Delphi begins its 10-year to the origins of the solar system", by Anders Ohlsson. In the post Anders displayed a Delphi newsgroup message by Kristofer Skaug, SSBV Aerospace & Technology Group, where he talks about his use of Delphi to create ground test equipment and interface simulator software for the ESA Rosetta mission.

Here is the original Delphi newsgroup post by Kristofer on March 2, 2004:

"I would like to thank the Borland Delphi team for giving me the ideal tool to create ground test equipment software in support of the Rosetta comet-chaser mission, which launched successfully today. I can only guess that without Delphi, the years of work I put into that project would’ve been considerably less fun!"

Marco Cantu and I reached out Kristofer this past week after the successful Rosetta project's touchdown of the Philae lander.We heard back from Kristofer who is still involved with the same company in the Netherlands.

Here is information that we received in two emails from Kristofer:

"Hello Marco and DavidI,"
"Nice to hear from you both, and quite remarkable that you recall this old message. Indeed I am still with the same company (although we have slightly streamlined our name) and we still use Delphi, recently upgraded to XE6."
"Here's a movie (sorry about the stone age video quality) I made back in 2002 on the occasion of visiting the Rosetta spacecraft in the integration cleanroom at ESA. We built a lot of test equipment for Rosetta, in this video you see the TM/TC check-out equipment (with all the flashing LEDs etc), allowing the master Test system to communicate with the spacecraft via special bypass lines directly into the on-board computer. And that's our Delphi-based Telemetry/Telecommand processing software you see in occasional screenshots. Around the 3-minute mark there's even a glimpse of an honest-to-god Borland Delphi 6 IDE :-)" 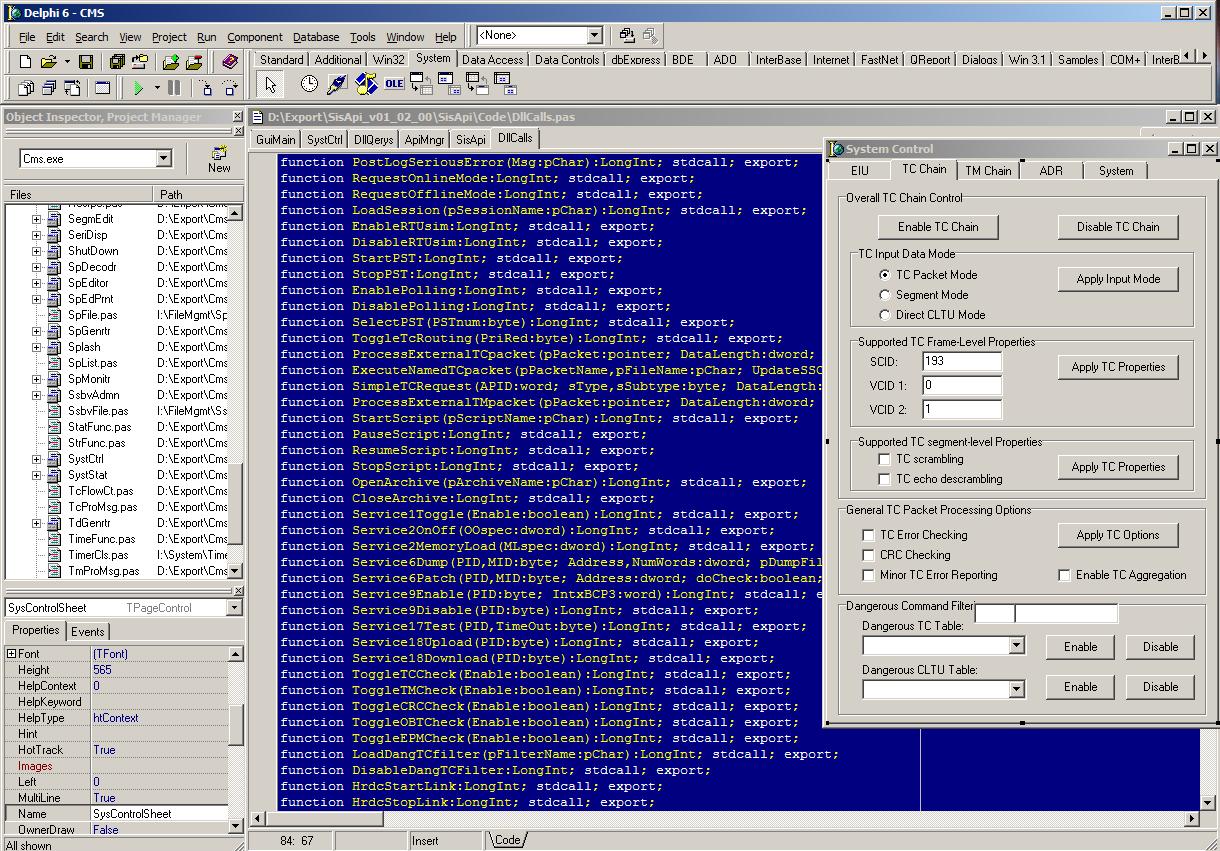 "We also built a series of Rosetta Spacecraft Interface Simulators ("ROSIS") which were used by all the science instrument teams for testing. The controller of this simulator was developed in Delphi 5. We went on tour around Europe and even to the U.S. (Southwest Research Institute in San Antonio, where the "Alice" instrument on the Rosetta orbiter was being built and of course JPL in Pasadena, for the MIRO instrument) to conduct standardized tests with these systems, meeting all the Rosetta science teams... it was a great experience."
"Today, the Rosetta TM/TC SCOE test equipment (shown in the above video) is installed in a special facility at the European Space Operations Centre (ESOC) in Darmstadt, Germany, where it is used to talk to the Rosetta "Engineering Model" - the first mock-up version of the spacecraft, fully functional but with cheaper (non-space-qualified) materials. This is used as a simulator to try out command sequences and software patches for the real spacecraft. So that old Delphi-based software is still in use for the Rosetta mission, more than 16 years after its initial release!"
"Since the Rosetta launch in 2004, we have had no significant involvement anymore in the project. But we are still reaping the benefits: Just like the comets are speculated to have had a seminal role in formation of living planets, the work we did for Rosetta was the starting point of a very successful product line. In particular the Delphi code base (which started out in Delphi 2) gave birth to our first truly re-usable code library, supported by a strong set of DUnit tests which we have been maintaining and using intensively up to this date (now in Delphi XE6, some of the code still bears visible traces to the Rosetta project!)."
"The proven staying power of Delphi, the robustness and stability of the RTL/VCL, the long-term maintainability across multiple compiler versions, next to the unequalled ease of use and productivity: These combine to an unbeatable argument in Delphi's favor when faced with the standard industry pressure to use more mainstream tools and languages. Holding its ground against C++ and Java for 20 years! Keep it up!"

Thank you, Kristofer, for using Delphi to help the Rosetta project and for continuing to update your code base to later versions of Delphi.