Posted by Paweł Głowacki on Wednesday, 9 February 2011 in Blogs
"Delphi Labs" is proud to announce the immediate availability of the new episode in the "DataSnap XE" serie: "Authentication and Authorization"! This work was scheduled for last week, but I hope to be back on track and just starting to work on the this week's episode on DataSnap filters.

The most challenging thing this week was to invent a possibly the most simple scenario of role-based security for a DataSnap server. I have end up with just implementing a basic authentication rule, that only users that provide a non-empty username are authenticated. Once you are authenticated, you should be assigned to roles. In my scenario if your username is "admin" then you are added to "admins" role, which is the only role that can call "ReverseString" server method.

The demo is as simple as possible and the associated EDN article is very much like a "demo script" that we are using for live developer events. The source code is on CodeCentral and there are two YouTube episodes that show building the secure server and client.

Did I mention that DataSnap is a feature of Delphi Enterprise (or Architect)? It is not available in the Professional version. But no worries! Until the end of March 2011 there is the worldwide promotion for Delphi developers willing to upgrade from Professional to Enterprise! Check with you local reseller for details! 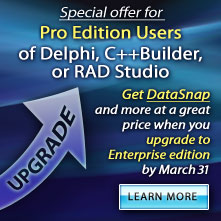