HomeBlogsPaweł GłowackiDelphi event in Romania for the first time ever!

Delphi event in Romania for the first time ever!

Posted by Paweł Głowacki on Friday, 16 March 2012 in Blogs
The history is happening right now, right here! I'm just back from Bucharest, the capital of Romania. Yesterday it was a pure pleasure to present "RAD Studio XE2 in Action LIVE!" to the crowd of enthusiastic developers. It looks it was the first Delphi/C++Builder event ever in Romania! 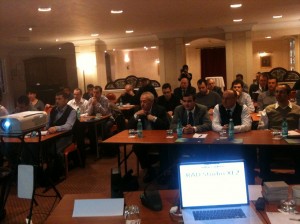 The audience was very technical and positive. There was no end to questions about Delphi, C++Builder, FireMonkey, future plans for RAD Studio and many other, sometimes very low-level.

The event was divided into three logical parts:

After the brief introduction to Embarcadero/CodeGear/Borland history we moved to the Embarcadero products, including developer tools, database tools, InterBase and AppWave. In the RAD Studio XE2 overview I have focused on native development with Delphi/C++Builder/FireMonkey and web development with RadPHP. During the demo part I have presented the new Delphi 64-bit compiler, VCL styles, new "TZipFile" and Documentation Insight, followed by the "hello world" RadPHP application and some jQueryMobile demos.

After the break it was all about FireMonkey. Slides mixed with demos. Compiling FireMonkey application for Windows and Mac OS X from the same source code was probably the biggest hit, plus many other demos illustrating key FireMonkey concepts like parenting, animations, effects, styles, 3D basics and advanced scientific and business visualizations.

In the last part of the event my goal was to showcase the most important features of "Enterprise" version of Delphi, C++Builder and RAD Studio, including connectivity to remote databases with dbExpress and LiveBindings, new Cloud API and DataSnap architecture, including mobile connectors and callbacks.