Posted by Paweł Głowacki on Tuesday, 23 May 2017 in Blogs 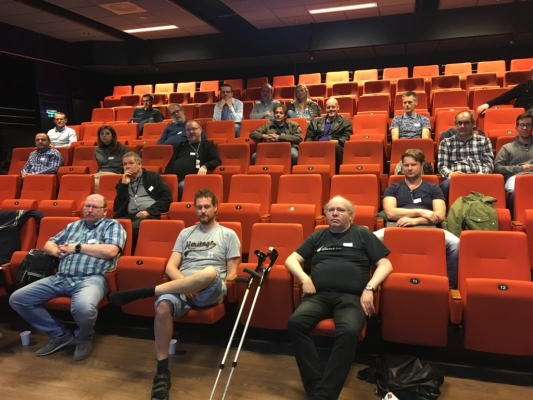 The weather started to rock. Last week was great and today in Norway, really up North, is beautiful sunny day and I'm wearing shorts waiting form my flight back home from Oslo. Norway is really nice. They have this nice balance between North and South European countries and people are relaxed. I like the fact that the floor in the whole airport is wooden. Nice feeling.

Today I have been continuing my RAD Studio 10.2 tour with the morning presentation in the culture centre of Lillestrøm, which is maybe twenty kilometers away from Oslo, the capital of Norway. Accidentally a few hundred meters from Alfasoft offices who are Embarcadero resellers for Norway.

Cinema facilities are always very conductive for developer events. Good display and audio system. Sometimes chairs are just too comfortable for the audience to stay awake and digest every single piece of technical info. The agenda today was "wypasiona", how we say it in Polish slang which means that there was enough time to cover all Delphi features that sometimes go unnoticed. The first part of the presentation focused on the IDE, Quick Edits and developer productivity enhancements that were introduced in the latest, but also in the last few versions. Then we have moved to the new Linux support. I have built and deployed a Delphi console and WebBroker apps to an Ubuntu local virtual machine. I could not resist showing FireMonkey running on Linux with Delphi plug-in from FmxLinux. This part was followed by discussing FireMonkey and VCL support for Windows 10, including the support for doing notifications on Win10 and building VCL forms with components like "TActivityIndicator" and "TSplitView". We have also gone through the process of creating APPX packages from Delphi projects for publishing in Microsoft Windows 10 App Store.

After a coffee break and a great sandwich full of Norwegian shrimps, we have moved into Delphi Enterprise technologies including FireDAC database access and RAD Server REST API publishing. After conversations in the break with Delphi developers, on top of the usual FireDAC stuff, I have gone deeper into MongoDB and JSON support introduced back in Delphi 10.0 Seattle. "Relational databases are dead!". That was my controversial point to show merits of NoSQL and Cloud API services. The last part was all about RAD Server. This time I have probably covered it all, with REST API publishing, but also other features including mobile push notifications, Swagger.io support, IoT "Thing Point" integration and FireDAC EMS client components.

What a day. My flight is just boarding. Take care and go Delphi!