Posted by Brian Alexakis on Friday, 21 August 2015 in Tips, Tricks and Techniques

“Under the hood” the IDE’s project, file, and build management handling has gone through a major overhaul and redesign to provide significantly extended available memory, giving developers a more stable, capable, and faster development experience. Build large, multi-million lines of code projects and enjoy a new level of productivity, performance and stability.

Get "More Coding in Delphi" ebook by Nick Hodges FREE!

Special upgrade offer for owners of XE3 and earlier!

With the purchase of the upgrade and Update Subscription, you can save up to 45% off the regular price of XE8 and get immediate access to the next major release when it becomes available! 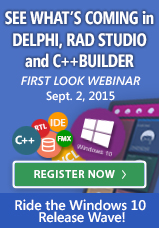 Join Embarcadero's Product Management team for this first look webinar of what's coming soon in RAD Studio. Be sure to tune in and see how RAD Studio is the fastest way to build and update data-rich, hyper connected, visually engaging applications for Windows 10, Mac, Mobile and IoT.

In this webinar you will learn about new innovations for RAD Studio, Delphi and C++Builder developers! Register Now! 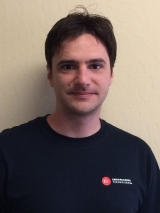