Posted by Adrian C1437 on Tuesday, 13 March 2012 in Blogs
The Debugger is the perfect tool to locate the source of any logic error in your application. You can use it to get control of the execution flow of your scripts while you watch the value of variables and expressions, allowing you to track the data until the point when something unexpected happens.

This is the code we are going to test. You might have already spotted the error, which is a common PHP logic error, but do not tell anyone! ;)

Running Into the Error

With that script open in RadPHP, lets go to Run > Run to get the script rendered on a web browser.

Since we did not pass it ‘pet’ on the URL parameters (we will later see how to do that from RadPHP), so far the script is behaving as expected. Now, lets edit the URL parameters and give ‘pet’ the value ‘cat’ so the script returns the other message. This time we can do this from the web browser itself to save time, later we will do it from RadPHP.

The message is still the same, while the other message should have been returned instead. There is our logic error. Time to locate its source using the Debugger.

Go to Run > Parameters… > Debugger, and set the Parameters field to ‘pet=cat’. Then, click OK.

Now it is time to start the execution flow control using the Debugger.

To start execution and pause it right on the first line, you can either go to Run > Step Over or Run > Trace Into, but we should start by examining the code which directly causes the error, which in this case is the expression on the if statement. We can take the execution flow directly to that line by clicking it (so the text cursor is placed on it) and going to Run > Run to Cursor.

Now, lets have a look at the value that those two expressions (the variable $isCat and the constant YES) have at that point of execution. To do so, you can just hover them, and you will get their value on a tooltip.

They match, they are both 0, as expected. Why did it fail before and is working now? (remember you do not know what is going on). In any case, 0 is obviously equal to 0 so, for whatever reason, this time the if statement will return true.

Yet I can not believe it suddently works. In fact, I need to see it by myself, see it print the right message this time.

To continue the execution flow, you can use the same commands that let you start its control in the first place. In this case, we need to go to the next step of execution, for which we can use either Run > Trace Into or Run > Step Over. The former, when calling a function or including a file, will take us to the included script or the script where the function is defined. The former will go directly to the next line of execution in the current script.

In this case both would work the same way, but lets go with Run > Step Over.

What the… I’m speechless, I never expected that to happen. You neither, did you? :)

Ok, if that if statement can not evaluate that expression right, I will get RadPHP to evaluate it.

And lets start the debugger again, get it to that line of code, and check the values are still both 0. They are.

But this time, instead of continuing with the execution, lets make sure that expression is evaluating to true at that point of execution.

Right-click on the Code Editor, and go to Debug > Evaluate/Modify. Then enter the expression on the Expression field ($isCat = YES), and click Evaluate. 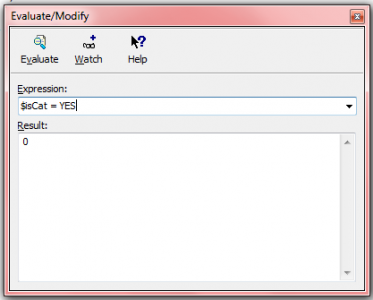 Anyone can make a mistake, and using = instead of == or === is one of the most common ones with PHP. It is perfectly possible for someone to go through all the steps above, and still don’t realize what the cause of the error is. In fact, I bet there are a lot of PHP forum threads out there covering this issue.

Just remember, if you ever find youself at a dead end while programming with RadPHP, our forums are always open, and there is a lot of nice people around :)

The techniques we used here to debug our code are perfect for short scripts, and fine on most situations you will run into. Yet, sooner or later you will need more advanced debugging features, which can save you a lot of time: breakpoints and watches.
Tags: Testing Tutorials