Posted by Jim McKeeth on Tuesday, 6 December 2016 in Blogs 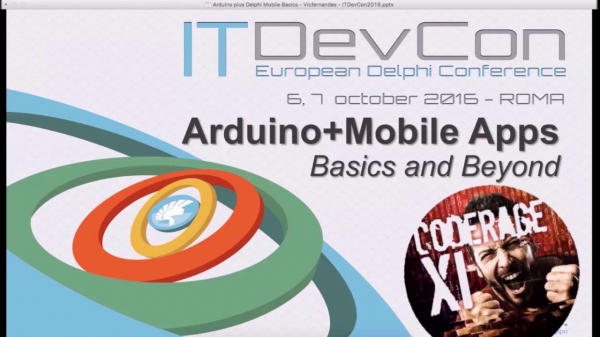 We start from the very basic Arduino microcontroller platform aspects to communicate your first device with a Delphi Mobile Firemonkey application in order to light up leds, lamps open doors and read/write digital IOs... we will read temperature, light and other analog sensors and much more!

Victory Fernandes, CTO; Embarcadero MVP TKS Victory is passionate about factory floor automation! As CTO @tkssoftware he has large software development, project and team management experience deploying multi-tier and multithreaded Manufacturing Execution Systems-MES for industrial automation, factory floor integration and logistics. As Embarcadero MVP he spoke at ITDevCon-2016-Italy and speaks at the Anuual Embarcadero Conference Brazil since 2011 (biggest Delphi event in the world with 500+ attendees every year) and several smaller events all around Brazil.