Posted by Andreas O1387 on Friday, 22 March 2013 in Blogs
My FireMonkey Clock app has been ported using a beta version of Delphi for iOS. 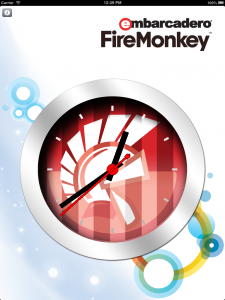 The app is a Universal app (supports iPhone and iPad). The main clock screen uses a TScaledLayout to ensure proper scaling down to the iPhone (the app was designed for the iPad).

If you hit the Info button it will take you to the setup tab, where you can select "Flame" (or FireMonkey second hand) as well as "Smooth drive" - the second and minute hands move smoothly. 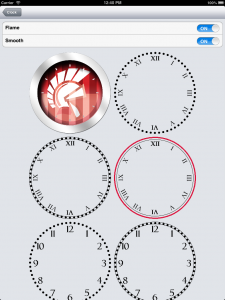 The setup screen uses a combination of items that scale and items that don't scale. For instance, the toolbar, the back button, and the listbox with its items are not supposed to scale, but still be aligned properly. The clock faces, however, do scale inside of a TScaledLayout. 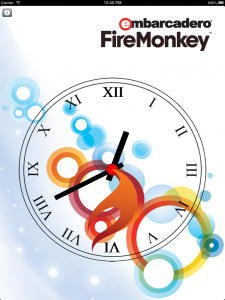 Above you can see what the FireMonkey second hand looks like.

Below is a screen shot of my Structure Pane where you can see how I designed the app:

I also wanted to mention performance. The previous version of the app was created in XE2 where I got about 2-3 frames per second in smooth mode - not very smooth. However, this version created with our upcoming product gets a blazing 60 frames per second on the iPad 3 using iOS 6.1.3 and almost the same fps rate on iPhone 4 (iOS 5.1) and iPad 2 (iOS 6.1) at about 55+ frames per second.

PS: The screen shots above are actually from the *next* update I will be pushing soon... The current one looks almost the same, except for a few changes in layout.
Tags: C++Builder C++Builder XE3 CodeRage Delphi Delphi XE3 ednfront FireMonkey iOS iPhone RAD Studio RAD Studio XE3