Since the early days, Delphi and C++Builder have been offering unbeatable support for Windows client application development. With these tools, Embarcadero continues to offer the best library wrapper for the Win32/Win64 API, the Visual Components Library (VCL), extensive support for Microsoft COM architecture (including OLD, ActiveX, and many other technologies), and direct access to the core APIs.

Beginning with RAD Studio 10 Seattle, developers can now leverage extensive, direct access to the new WinRT API—which is the core of Windows 10 architecture. Though Microsoft has built this new architecture (WinRT) and is encouraging developers to rewrite and migrate their code, RAD Studio gives developers the flexibility of moving their existing Win32/Win64 API-based applications over to Windows 10—with much less frustration! After migrating these applications to RAD Studio 10.1 Berlin, it will be possible to extend them by leveraging the WinRT APIs.

Currently, RAD Studio is the only tool that gives developers the ability to leverage existing code and also support the latest Windows APIs. Clearly, RAD Studio has the best migration path to the latest editions of Windows 10.

RAD Studio Visual Component Library (VCL) has a solid reputation of being the best OOP and component library for native Windows development. The new VCL controls for the Windows 10 UI and components that integrate WinRT capabilities (such as  notifications and contracts) continue the same level of excellence. This also underscores the fact that a well-designed library can endure and be brought to the future—along with the millions of applications built with it. 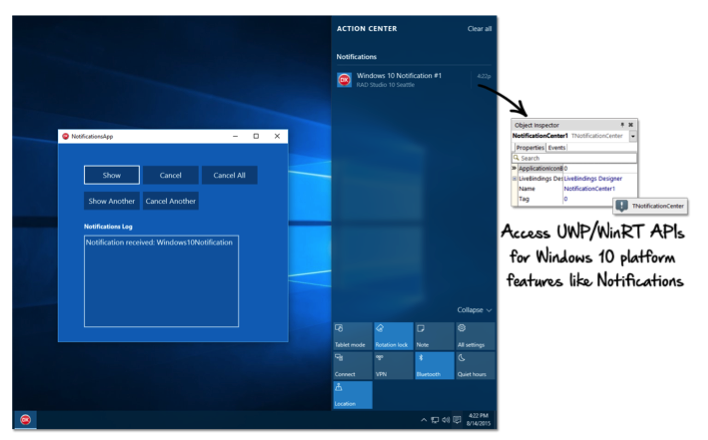 The future of Windows is here already:  Windows 10 Anniversary Edition. Without question, RAD Studio is the best development tool to support this latest edition of the Windows operating system—in all of its versions.

A bit more about VCL controls: Not only does RAD Studio offer extensive support for WinRT integration, but it  also includes new Windows 10 VCL controls specifically built for  easier support of the Windows 10 user interface and user experience. The new native VCL controls—such as RelativePanel, ToggleSwitch, SearchBox, SplitView, and ActivityIndicator—map common Windows 10 UI elements, but they do so independently and according to the classic VCL architecture. This means that RAD Studio applications that employ these new Windows 10 UI controls will also run smoothly on Windows 8 and Windows 7—unlike applications built purely with WinRT and restricted to run on Windows 10 only. 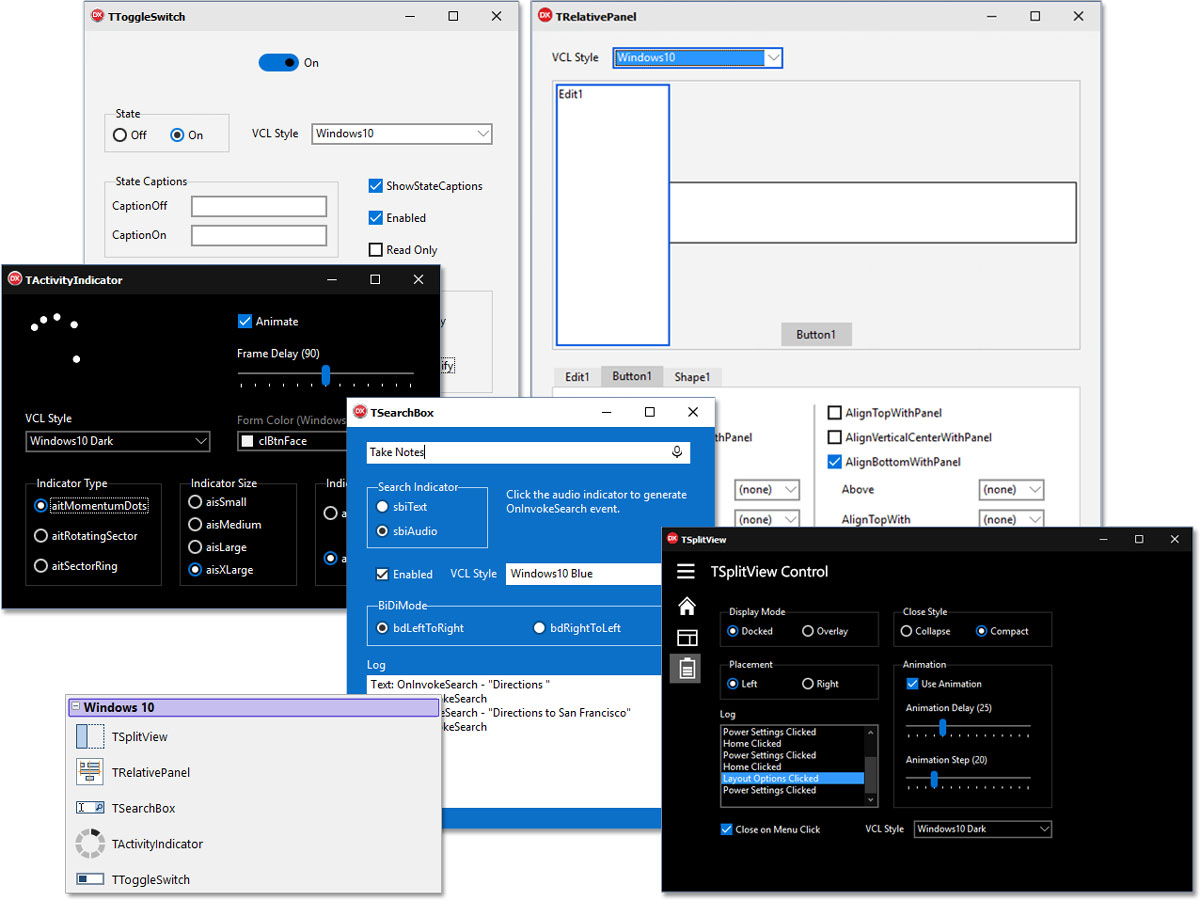 With the release of  RAD Studio 10.1 Berlin, there is additional Windows 10 support for Bluetooth LE (while retaining previous Bluetooth support), along with the new VCL and FireMonkey styles that are specific to Windows 10.

With RAD Studio, all of your existing VCL applications are easily migratable to Windows 10. You’ll get a solid matchup with the new platform UI—merely by making a few simple changes to each control—and you won’t need to rewrite all your code for new platforms and ever-changing libraries. The code you wrote with RAD Studio, Delphi, or C++Builder for previous editions of Windows—even up to 20 years ago. You can rather easily update legacy code to run in a modern Windows 10 application— very smoothly, while also leveraging the latest UI controls and platform APIs. This goes entirely beyond any other Windows development tool.

Today, you can already convert and package Delphi and C++Builder 10.1 Berlin applications using the APPX format for Windows 10 Anniversary Edition users. These apps are convertible into first class UWP applications using the Windows Desktop Bridge—also known as Project Centennial. This gives developers the ability to distribute single APPX files to a user that is running Windows 10  Anniversary Edition. I already highlighted the core process in an earlier blog post at http://community.embarcadero.com/blogs/entry/rad-studio-windows-10-anniversary-update-and-centennial.

A Webinar to Learn More